The southern coast of Turkey was at one time known as Lycia and dominated by Lycian civilisations, meanwhile the western coast was occupied by carian settlers but before all that the land was ruled by Ancient Greeks and Roman Empires and later fell to Byzantines and Ottomans. Their ruined cities and burial sites sit nestled between magnificent mountain ranges and the dazzling Turquoise Coast making the southwest of Turkey a haven for both historians and nature lovers. 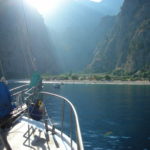 This popular holiday town sits right in the heart of the Lycian Region and even within the town centre you can see ancient stone sarcophagi sitting on the side of the street while 4th century rock-cut tombs (Amintas Kaya Mezarlari) are illuminated in the cliffs above the town. There are many Turkey Tours starting from Fethiye taking you to places within the province and all over Turkey. Fethiye itself is built upon the ancient city of Termessos and within a 30 minute drive you can reach the well preserved remains of a hilltop citadel, Tlos. Continue by bus, car or tour for another 15 minutes to visit the hidden canyon, Saklikent. At 300 metres deep and 18 km long it the second largest canyon in Europe and walking through the permanently ice cold waters between the towering limestone walls you may feel like you’ve been thrown into an Indiana Jones movie. 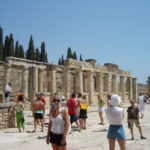 Once a rural farming town, Selcuk is now considered the gateway to the ancient city of Ephesus and launching pad for visiting other archeological sites such as the Temple of Artemis and Didem or Early Christian monuments like the House of the Virgin Mary, the Cave of the Seven Sleepers and St John’s Basilica. All these sights are within a short walk or drive of the quaint town. Despite the increase in tourism Selcuk has managed to retain most of its traditional authenticity. The narrow streets are still adorned with classic examples of Ottoman architecture and most accommodation is in family run guesthouses. Aside from history the town is located among stunning scenery, nestled between lush green hills and only 18 km from the Aegean Sea, there are plenty of hiking opportunities and small villages to visit, like Sirince where you can stroll about and appreciate the pretty whitewash houses with bright blue doors and windows frames and taste some of the locally produced wines.

Olympos is a hamlet in Antalya province and a trendy weekend getaway for Turks from the city. Between the thickly forested valley slopes a river descends from the Taurus Mountains and meets with the Mediterranean sea. Along one bank are a variety of tree house accommodations, campsites and quirky wooden bars, while on the opposite bank are the remains of an ancient Lycian City. Heavily overgrown a theatre can be found overshadowed by pines and sarcophagi and decorative tombs are scattered throughout the forest. Much of this site still hasn’t been uncovered but from the beach you can gaze up to see stone walls emerging from the trees along the rocky cliftops. There are plenty of quiet coves which you can explore by kayak or by hiking from the beach and at the far side you can visit the Caretta Caretta nesting area from May to October.

Olympos is also located along the Lycian Way, a 540 KM hiking trail from Fethiye to Antalya, and following the trail from Olympos will take you into a stunning national park and to the foothills of Mt Tahtali where you can visit the ever burning flames, Chimaira. These natural flames are literally bursting from the between the cracks in the rocky ground and in the evenings you can bring some friends and marshmallows to toast while admiring the view out to sea. 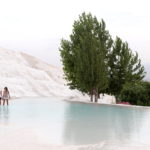 The village of Pamukkale is best known for its stunning ‘Cotton Castle’, made up of brilliant white travertine pools of mineral rich thermal waters which cascade over the steep valley slope. A visit to this unique natural phenomenon at sunset is a must, photographers will love how the light reflects of the pools and snowscape. Running below the pools is a mile long entrance way to a ancient Greek-Roman military station which was later converted to a prosperous spa city. Hierapolis still hosts an impressive theatre and temple and sacred thermal pools where you can bathe among fallen marble columns. You can visit all these natural and historical wonders and more on a tour from Pamukkale to Selcuk and Istanbul or head to the Turquoise coast to see Turkey’s breathtaking scenery and extensive history by bus, on foot or by gulet boat.

Note: This is a guest post by our valued contributor.