Turkey is an Eurasian country. Asian Turkey, which includes 97 percent of the country, is separated from European Turkey by the Bosphorus, the Sea of Marmara, and the Dardanelles. European Turkey comprises 3 percent of the country.[227] The territory of Turkey is more than 1,600 kilometres (990 miles) long and 800 kilometres (500 miles) wide, with a roughly rectangular shape.[228] It lies between latitudes 35° and 43° N, and longitudes 25° and 45° E. Turkey’s land area, including lakes, occupies 783,562 square kilometres (302,535 square miles),[229] of which 755,688 square kilometres (291,773 square miles) are in Southwest Asia and 23,764 square kilometres (9,175 square miles) in Europe. Turkey is the world’s 37th-largest country in terms of area. The country is encircled by seas on three sides: the Aegean Sea to the west, the Black Sea to the north and the Mediterranean to the south. Turkey also contains the Sea of Marmara in the northwest. 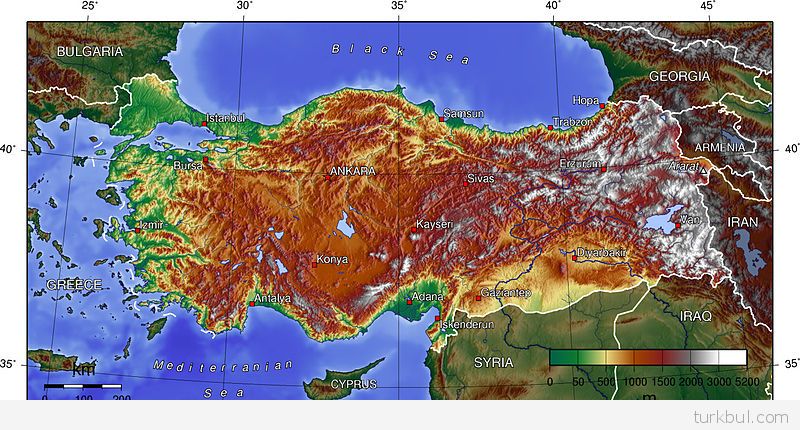 A photograph of Lake Van and the Armenian Church of Akhtamar. Van is the largest lake in the country and is located in eastern Anatolia.
The European section of Turkey, East Thrace (the easternmost region of the Balkan peninsula), forms the borders of Turkey with Greece and Bulgaria. The Asian part of the country is comprised mostly by the peninsula of Anatolia, which consists of a high central plateau with narrow coastal plains, between the Köroğlu and Pontic mountain ranges to the north and the Taurus Mountains to the south. Eastern Turkey, located within the western plateau of the Armenian Highlands, has a more mountainous landscape and is home to the sources of rivers such as the Euphrates, Tigris and Aras, and contains Mount Ararat, Turkey’s highest point at 5,137 metres (16,854 feet), and Lake Van, the largest lake in the country. Southeastern Turkey is located within the northern plains of Upper Mesopotamia.

Turkey’s varied landscapes are the product of complex earth movements that have shaped the region over thousands of years and still manifest themselves in fairly frequent earthquakes and occasional volcanic eruptions. The Bosphorus and the Dardanelles owe their existence to the fault lines running through Turkey that led to the creation of the Black Sea. The North Anatolian Fault Line runs across the north of the country from west to east, along which major earthquakes took place in history. The latest of those big earthquakes was the 1999 İzmit earthquake.