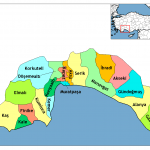 It was built in the name of the Roman Emperor Hadrian who came to Antalya at this time. Hadrian’s Gate is considered as Pamphylia’s most beautiful gate work. The upper part of the gate has three openings in the shape of a cupola. As you look at this arch you will notice that excepting the pillars the gate has been built entirely from white marble.In the days of the Roman Empire the city walls were enclosed the outside of the gate. It was for this reason that they gates were not used for many years. The original Gate was built to hold two stories, however little is known about the top storey. On either side of Hadrian’s Gate are towers. These towers were added to the gate at different periods of time. The southern tower is known as the Julia Sancta tower and it is a work of the Hadrian era. It was made from plain stone blocks. The base of the northern tower belongs to antiquity. The upper portion of the tower is a remnant from the times of the Seljuks.Once you have explored this part of Antalya you may wish to head over to the Karaalioglu Park. You will see that this park is a large park in the city. The park can be found just south of Kaleici in the city center. You will find that it is easy to reach it by foot or by tram. While enjoying nature is possible within this park you will see there are other attractions here as well. These will include the Municipal city theater, an ancient fortress called Hidirlik Tower, the mayor’s office. In addition to these you will be able to obtain a spectacular view of the Gulf of Antalya and the nearby cliffs.Another place of interest that you will find as you explore Antalya is that of the Broken Minaret or the Kesik Minare. This minaret was originally built as a Roman temple in the 2nd century AD. During the 600s it was converted into a Byzantine church in honor of the Virgin Mary. However not too long after this it was heavily damaged in the 700’s. It was repaired in the 900s back to its former glory.During the reign of the Great Seljuq Empire, Antalya was acquired by them and the church was converted into a mosque. It was during this time when the actual minaret was added. In 1361 when the Crusader King of Cyprus took Antalya from the Seljuks it once more became a church. The history of this church turned mosque continued until it was destroyed in a fire of 1846. The only piece remaining from this building is that of the minaret which today is known as the Kesik Minare.These are the sights that you will be able to see when you visit the city of Antalya. The next time you are in Turkey make sure that you come and see what other places of interest you can uncover. Here in Antalya the past and the present are closely intertwined.

If you’re looking for the kind of holiday where you can mix the old and the new, the ancient with the futuristic, through pursuits such as archaeology, art, history and endless sunbathing, Turkey is a fantastic destination. And if you just want the last part and head straight to the beach, all you need to do is hop on the Antalya Lara transfer as soon as you land at the airport.The Perfect Next StepFor many visitors, taking the Antalya Lara transfer from the airport and heading to Lara Plaji (Lara Beach) is perhaps the most natural thing to do. The beach itself is not to be missed: the long stretches of golden sand, the warm balmy breezes that blow, the convenience of having everything you need for a beach holiday, such as towels, umbrellas, beach chairs and mats, and food, drinks – you really couldn’t ask for more. You don’t have to be a beach buff to enjoy this popular destination, even if it’s just for a little while.The popularity of Lara beach is the reason there has been tremendous growth in the tourism industry in the area. With the growing number of accommodation establishments in the area – from budget rooms to high ends hotels – it’s no wonder many visitors arriving at the Antalya airport find the Antalya Lara transfer the most logical next step. Not only are the rates excellent, it makes the perfect base for exploring the many attractions the region has to offer.Where to goLara Plaji is roughly 45 minutes via the Antalya Lara transfer. The convenience of a short ride from the beach to the city centre and many of the area’s top attractions make it a great choice for a base. These attractions are highly accessible using various modes of local transport – including car and bus. 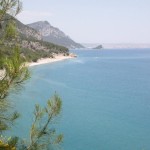 From here, there are plenty of opportunities for day trips to places like Antalya’s old city, and more.The beachThis gorgeous, long stretch of golden beach, with balmy Mediterranean breezes and gentle waves can make any visitor want to stay longer. Imagine an easygoing paradise where almost everything needed for a leisurely stay is at your fingertips – from a cold shower to a cold mojito! If its privacy and peace and quiet you want, that’s certainly available as well – further down the long stretch of sand are many secluded places you can get away from it all.When to goSpring is the best time to go, with its mild weather and long days – plus it’s off-season for the Aegean and Mediterranean resorts, which means better rates for accommodation. Summer, on the other hand, is peak season, with accommodations and other arrangements filling up fast, so it is better to book early to avoid high prices and worse, running low on options.