You can find top destinations around Kusadasi, Izmir region. It is easy to visit all of them in a few days. I highly recommend you to arrange your tour before you visit Turkey.

Top destinations are Ephesus, The House of Virgin Mary, The temple of Artemis, The Basilica of St John, Isa Bey Mosque, Pigeon Island. 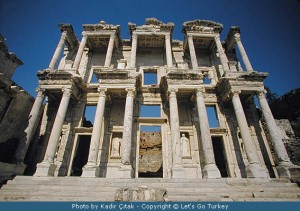 Ephesus which was established as a port, was used to be the most important commercial centre. It played a great role in the ancient times with its strategic location. Ephesus is located on a very fertile valley.

Ephesus, once, the trade centre of the ancient world, a religious centre of the early Christianity and today, Ephesus is an important tourism centre in Turkey.

The ancient city Ephesus is located in Selcuk

The original site of Ancient Ephesus was most likely established on the Aegean coast, on the shores of that sea which is today located 8 km. away from the archaeological excavations.

The House of Virgin Mary

The House of the Virgin Mary (Meryemana) is a Christian and Muslim shrine located on Mt. Koressos (Turkish: Bülbülda??, “Mount Nightingale”) in the vicinity of Ephesus, in modern-day Selçuk. 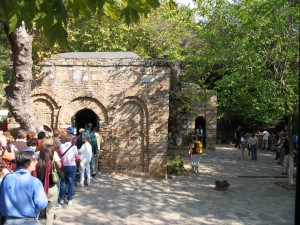 The belief that the Virgin Mary had spent her last days in the vicinity of Ephesus and that she had died there, focused attention on a nun named Anna Katherina Emmerich who had livid in the late 18th century (1774-1820). The efforts to find the house were greatly influenced by her detailed description of the Virgin Mary’s coming to Ephesus, her life and her last home there and the characteristics of the city although she had never been to Ephesus.

The temple of Artemis

The Temple of Artemis was located near the ancient city of Ephesus, about 50 km south from the modern port city of ?zmir, in Turkey. Today the site lies on the edge of the modern town of Selçuk.

The temple of Artemision is known as one of the Seven Wonders of the Antic world. It has been built in the areas of Ephesus on a flat area which has over the centuries turned into a swamp. Today one can only see the ruins of the foundations of this marvelous construction of the Hellenistic Age, entirely made of marble and full of sculptured columns’ capitals and shafts. The most beautiful remaining of this temple are today exhibited in the London British Museum.

The Basilica of St John

The Basilica of St. John (St. Jean Aniti) was a great church in Ephesus constructed by Emperor Justinian in the 6th century. It stands over the believed burial site of St. John, who is identified as the apostle, evangelist (author of the Fourth Gospel) and prophet (author of Revelation).

The basilica is on the slopes of Ayasoluk Hill near the center of Selçuk, just below the fortress and about 3.5 km (2 miles) from Ephesus.

St. John’s basilica was cruciform and roofed with six massive domes. The capitals facing the nave (central aisle) bear the monograms of the Emperor Justinian and his wife Theodora.

The current entrance leads into the basilica through the southern transept. Originally, entry was through the oversize exterior courtyard atrium to the west of the nave, which led worshipers through the narthex and finally into the far end of the nave.

The brick foundations and marble walls have been partially reconstructed; if they were fully restored, the cathedral would be the seventh largest in the world.

More recent excavations east of the apse have revealed a baptistery and central pool, along with an attached chapel covered in frescoes depicting the saints.

Isa Bey Mosque is one of the most delicate examples of Seljukian architecture, situated below the basilica of Saint John. The mosque was built by the master Syrian architecture Ali son of Mushimish al -Damishki, between the years of 1374 and 1375.

The Isabey Mosque is one of the oldest and most impressive works of architectural art remaining from the Anatolian beyliks. The mosque is situated between the Saint Jean Church and the remains of the Temple of Artemis on the skirts of the Ayaslu? Hills at Selçuk, Izmir, formerly Ephesus in Turkey. It was built by the architect Ali in honor of the Aydinoglu Isa Bey. In the 19th century, it was also used as a caravanserai.

Pigeon Island, with its gleaming image, really deserves to be symbol of Kusadasi. The eye-catching view of the island, uniting with the panoramic colors of sunset attract every visitors. As the island was much-frequented place of birds during the seasonal migrations, it was named as Bird Island. 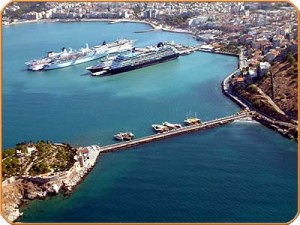