This page is outdated.  This airport is being used now for cargo and aviation flights. Not for general passengers.

After Mustafa Kemal Ataturk airport is named in 2011. It give servie to more than 37.5 million passengers, making it the eighth largest airport in Europe. Flag carrier Turkish Airlines uses the airport as a hub.

In the native Turkish Airlines flies from Istanbul all the major cities within Turkey, including ones Izmir , Ankara , Gaziantep , Kayseri , Adana , Antalya , Trabzon , Hatay , Malatya and Elazığ . The airline flies internationally important goals of Istanbul on from, including New York , Tokyo, Seoul, Hong Kong, Sao Paulo, Bangkok or Beijing . To almost all major cities are served in Europe from Istanbul Ataturk Airport. Other airlines such as Lufthansa , Swiss , Air France , Emirates , British Airways and KLM offer daily flights to Istanbul Ataturk Airport. 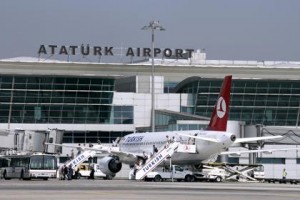 The Ataturk airport is located in the European part of the metropolis in the district was constructed as , 24 km southwest of the city center.

There is a metro connection to the airport by metro line M1 , whose western terminal is the Ataturk airport. This moves to the downtown district on the European side to Aksaray . At the stations Merter, Bahçelievler and Ataköy can switch through the Metrobüs be reached, the connecting Europe and Asia. In Zeytinburnu, in the tram line T1 is switched, the more moves into the old town. In addition, branches a more underground and a rail line from the M1. The curve is also the headquarters Esenler bus station for long distance service.
Airport Shuttle Service: This service is performed by the Havaş and runs every 30 minutes in the districts Bakırkoy , Yenikapı, Aksaray to Taksim Square , hourly to Kozyatağı (on the Asian side) and a shopping center in the district Akmerkez Etiler.
By car the airport via the E5 (D100) motorway and the (Trans-European Motorway) TEM motorway can be reached.
The city buses run also every five to ten minutes from the Ataturk airport, but this is a slow alternative.